Down the rabbit hole we went…and into the second exhibition by the Psychedelic Museum. Alice’s Adventures in Underground Culture brought together the fabulous art of John Coulthart, expertly printed onto blotter paper, and works from a number of other artists inspired by Lewis Carroll’s Alice.

This three-day exhibition opened with an evening event featuring a panel discussion on the links between 1960s psychedelic music and culture, and the persistent fascination of Carroll’s work. The limited size of the venue meant that only 90 tickets were available and these sold out weeks ahead of the show. This was a clear indication of the demand for events of this type. In Britain there are numerous scientific and social events related to psychedelics, but there is obviously a thirst for engaging, intellectual commentary and reflection on psychedelic arts and culture. We’ve taken note and will try to enable larger groups to attend in future as far as possible!

Alice’s Adventures… and the Psychedelic Museum also received some welcome publicity by being recommended by The List and Time Out (and the prestigious Psychedelic Press), as well getting positive mentions by many other listing sites.

The panel discussion, featured Andy Roberts, Jake Fior, Sophia Satchell-Baeza, and John Coulthart himself, ably facilitated by our own Nikki Wyrd. An hour of informed and erudite conversation held the attention of the audience, who asked some thoughtful questions in the half hour Q&A session. We talked of many things, including laudanum, migraines, feminism, pastoral idylls vs authoritarian society, bands (including The Beatles), mathematics, and cinematic representations of the Alice story.

Over 600 people visited the exhibition, which was very well received. Below are some pictures of the event for your enjoyment. If you attended and have images, video or audio you’d like to share please get in touch with us, via psychedelicmuseum@googlemail.com The opening panel discussion was recorded, and once our sound man has improved the quality, we will upload that too. 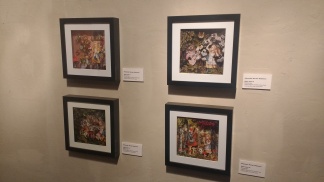 Detail of artwork by Civilized Punk 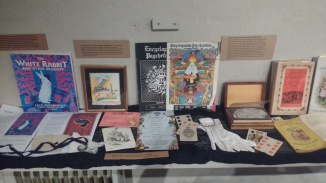 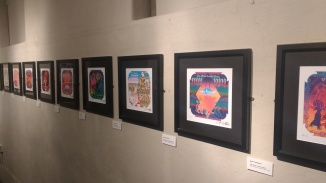 A visitor is captivated 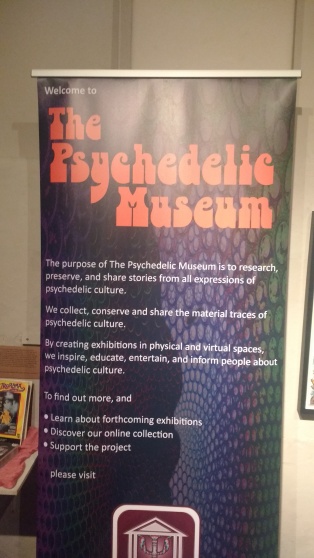 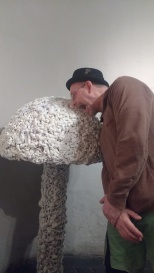 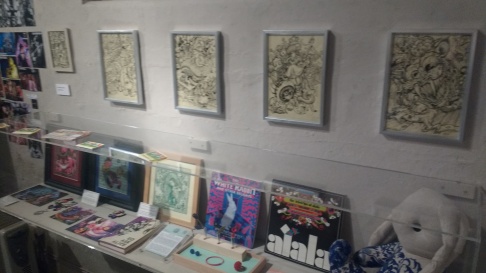 Many thanks to the team at The Horse Hospital, and to all those amazing people who gave freely of their time and enthusiasm, in order to make this exhibition happen.

Special thanks to the panel members:

Museum director Rob Dickins (of Psychedelic Press UK fame) has started the ball rolling for another exhibition in London. This is being tentatively timetabled for May. Stay tuned to this channel and our Facebook page for more information as details are confirmed!

Artists on display in Alice’s Adventures in Underground Culture

“It's a very salutary thing to realize that the rather dull universe in which most of us spend most of our time is not the only universe there is. I think it's healthy that people should have this experience.”